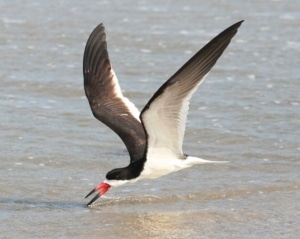 Where are they found?

Black skimmers are classified as a threatened species in Maryland by DNR. They are a summer resident, coming here to breed. They are present here from April to November, preferring to nest in colonies on coastal beaches and dredge spoil islands. The 150-350 pairs which nest in Maryland are concentrated in Maryland along the Atlantic coast of Worcester County. Some will also breed in the lower Chesapeake Bay adjacent to Dorchester County. Black skimmers spend the winter along the southeast coast, South Carolina to Florida.

What do they eat?

Skimmers are named such because of the way they feed. Skimmers fly low over the water, skimming the surface with their lower bill. When food, usually a small fish is encountered, the skimmer will quickly closes its mouth, capturing it’s meal. Black skimmers will catch most of their food (small fish) this way. They will also catch shrimp and other small crustaceans in this manner. Although active during the day, Black skimmers will do a lot of their feeding at night.

What other kinds of skimmers live in Maryland?

The black skimmer is the only kind of skimmer in Maryland.

Although black skimmers are a water bird with webbed feet, it is unusual for them to be seen on the water swimming. They’re either in the air or on the ground. Loss of nesting sites and disturbances on their breeding grounds are a major reason why black skimmers are threatened in Maryland.