Atlas is available from your favorite bookseller. Order your copy today!

Despite their small sizes, Maryland and Washington, DC, possess a vast range of environments—from the high peaks of the Allegheny Ridges to the low marshes of the Chesapeake Bay. Home to 200 nesting bird species, these habitats are under constant threat from urban sprawl, changing farming practices, and the degradation of coastal wetlands. The Second Atlas of the Breeding Birds of Maryland and the District of Columbia documents the impact of these environmental changes on the region’s bird population and discusses the recovery of the endangered Bald Eagle and the discovery of three new species—the Common Merganser, the Ruddy Duck, and the Mississippi Kite.

The Second Atlas brings knowledge of the area’s nesting birds into the twenty-first century and identifies those species and habitats most in need of conservation.

Species accounts, each with a stunning color photograph, provide detailed coverage of the habitats, biology, and relative abundance of Mid-Atlantic nesting birds. Up-to-date maps reflect changes in their breeding ranges and distributions over the past two decades. Of perhaps greatest value, the atlas provides comparative analyses with data from the first statewide survey done in the 1980s.

Treasured by birders—and an invaluable reference for ornithologists, conservationists, and land-use planners—this book significantly adds to our understanding and management of avian species in the region for the next decade.

Walter G. Ellison was the project coordinator of the Maryland and D.C. Breeding Bird Atlas Project at the Maryland Ornithological Society. 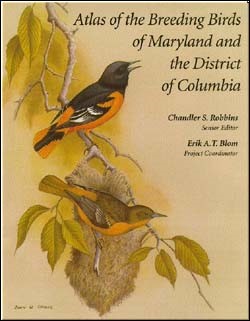 Copies are still available at your favorite bookseller. Purchase your own copy today!

The Atlas of the Breeding Birds of Maryland and the District of Columbia is a publication of the Maryland Ornithological Society and the result of tens of thousands of hours of work in the field, in libraries, in file rooms, at computer terminals, and at kitchen tables. The culmination of five years (1983-1987) of intensive field work by professional wildlife biologists and 800 volunteers, it presents data on 199 species of birds that breed in Maryland and the District of Columbia.

The senior editor was the Dr. Chandler S. Robbins, a wildlife research biologist with the U.S. Department of the Interior since 1945, who devoted most of his life to the study of distribution, migration, and habitat requirements of Maryland birds. With Bertel Bruun and Herbert Zim, he wrote Birds of North America. He was editor of Maryland Birdlife since 1947 and technical editor of Audubon Field Notes – American Birds, 1952-1989. Eirik A. T. Blom was editorial consultant to Birdwatcher’s Digest and regional editor of American Birds. Cover art for the atlas featuring a Baltimore Oriole was painted by John W. Taylor.

Each species account contains information on habitat requirements, distribution, abundance, history, and nesting characteristics. The field observers achieved over 99 percent coverage of the study area and generated over 100,000 records.

Highly accurate, and compactly presented, The Atlas establishes a baseline of breeding distribution on which all future studies can rely and will be a valuable tool to anyone–amateur and professional alike–concerned with our ornithological heritage.