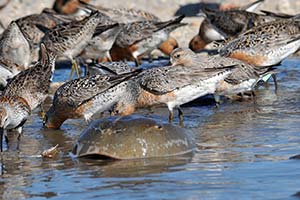 For a while, it looked like they might actually be in recovery. But this year’s census of the American subspecies, the rufa Red Knot, found that numbers have plummeted to an all-time low. The likely cause? Food shortages in Delaware Bay, a crucial feeding stopover site on their migration.

This January, surveyors flying over Tierra del Fuego, South America, beheld a sorry sight: the view from the helicopter windows told a dramatically different story to the same time last year. It wasn’t hard to see that the number of rufa Red Knots Calidris canutus overwintering at this site had fallen dramatically – to a shocking 9,840 birds. This is a 25% decrease on the number recorded in January 2017 (13,127), marginally the lowest recorded since surveys began (the previous low was 9,850 birds in 2011).

And it had all been going so well. The conservationists of the Western Hemisphere Shorebird Reserve Network, who have been conducting this ongoing study, had been quietly hopeful that the promising increase of 15% between 2016 and 2017 would continue. But, sadly, this was not to be. For such a small population, and one that tends to stick together and move as one major flock, it’s not surprising that one setback will impact them all. And that’s what’s happened in this case.

Survival of the fattest

To pinpoint the cause, we need to travel over 10,000 km to Delaware Bay on the Atlantic coast of the USA – which is actually a stopover point on the rufa Red knot’s migration back from Tierra del Fuego, to its Spring breeding grounds in the Arctic.

To find out more….